Hidden amongst Brighton's South Lanes, The Font, a Grade II listed former chapel, is a pub-cum-nightlife bar with a uniquely traditional past, yet overtly modern, party forward clientele.

JMDA took inspiration for the concept from the premises original use as a chapel with Adam & Eve being loosely reference in the colours/patterns used.
The Font is a very spectacular and historically sensitive building with a feature domed ceiling & typical ‘chapelesque’ wrap-round balcony to the centre which influenced the perimeter of the internal dining areas. The refurbishment is a massive transformation from the once tired pub/night club.
Being located in central Brighton, it has a large night-life presence which we were keen to retain. We have incorporated poseur seating, session tables & booths to cater for parties/groups of friends and which add comfort to the previously open spaces. Above the completely new industrial metal backfitting, a DJ booth features bedecked with warm filament bulbs & distressed copper panels. New large faux timber / distressed finished doors give the illusion of an external façade to either side of the DJ unit. Specialist wall finishes were used on the faux doors to create a worn/aged look.
The site is filled with ‘neon’ signage with quasi-religious wording together with intense coloured lighting which helps the morphing of the premises from day time drinking establishment to a more ‘clubby’ night time vibe. A ‘Water to Wine’ feature wall has blue LED tubes & buckets to represent the water with pinky-red LED tubes into buckets to represent wine. Mirrors covered in faux planting are incorporated either side of ground floor seating. To one side is the ‘Eve’ mirror with roses & colourful planting whilst at the other side is the ‘Adam’ mirror with thorns/ivy. Patterned upholsteries are used to furniture located in front of mirrors, some bright florals for the Eve mirror and more leafy deep fabrics in front of the Adam mirrors.
Crackle effect paint was widely used to give a worn/industrial feel. Textures & materials are deliberately harsh in some areas, juxtaposed with soft warm ‘neon’ signs/tubes and faux planting.
Led colour changing light was used to enhance the dome above.
Theatre spot lights have been installed above feature tables together with strips of glowing filament lamps in metal cages, used to create a feature on the ground floor ceiling.
A Graffiti artist was employed to highlight the main entrance doors with a 3D effect bible covered in the deadly sins. The artist was also asked to recreate the Brighton Skyline to the perimeter of the balcony.
The premises are now a vibrant thriving venue with a bright future. Let there be light! 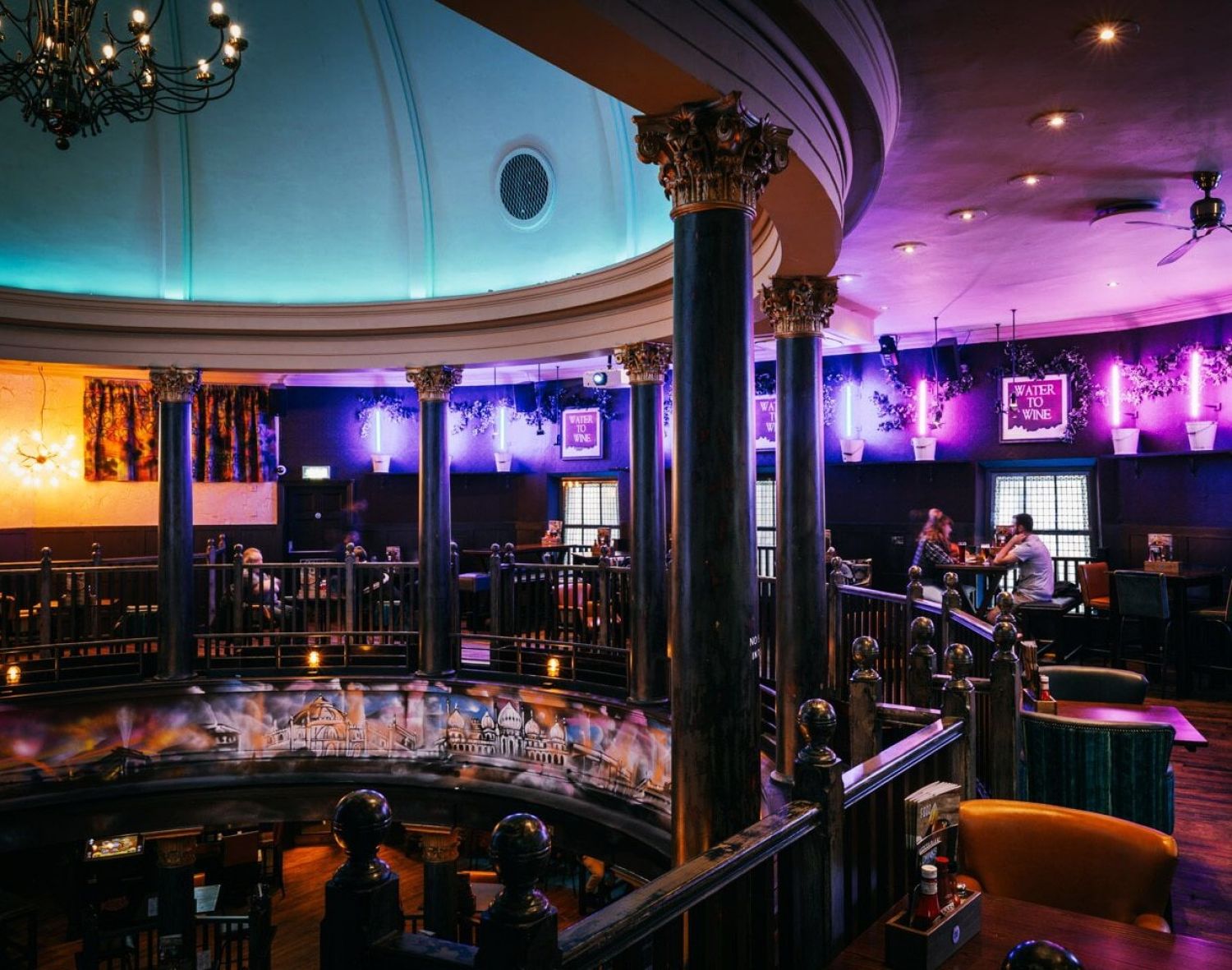 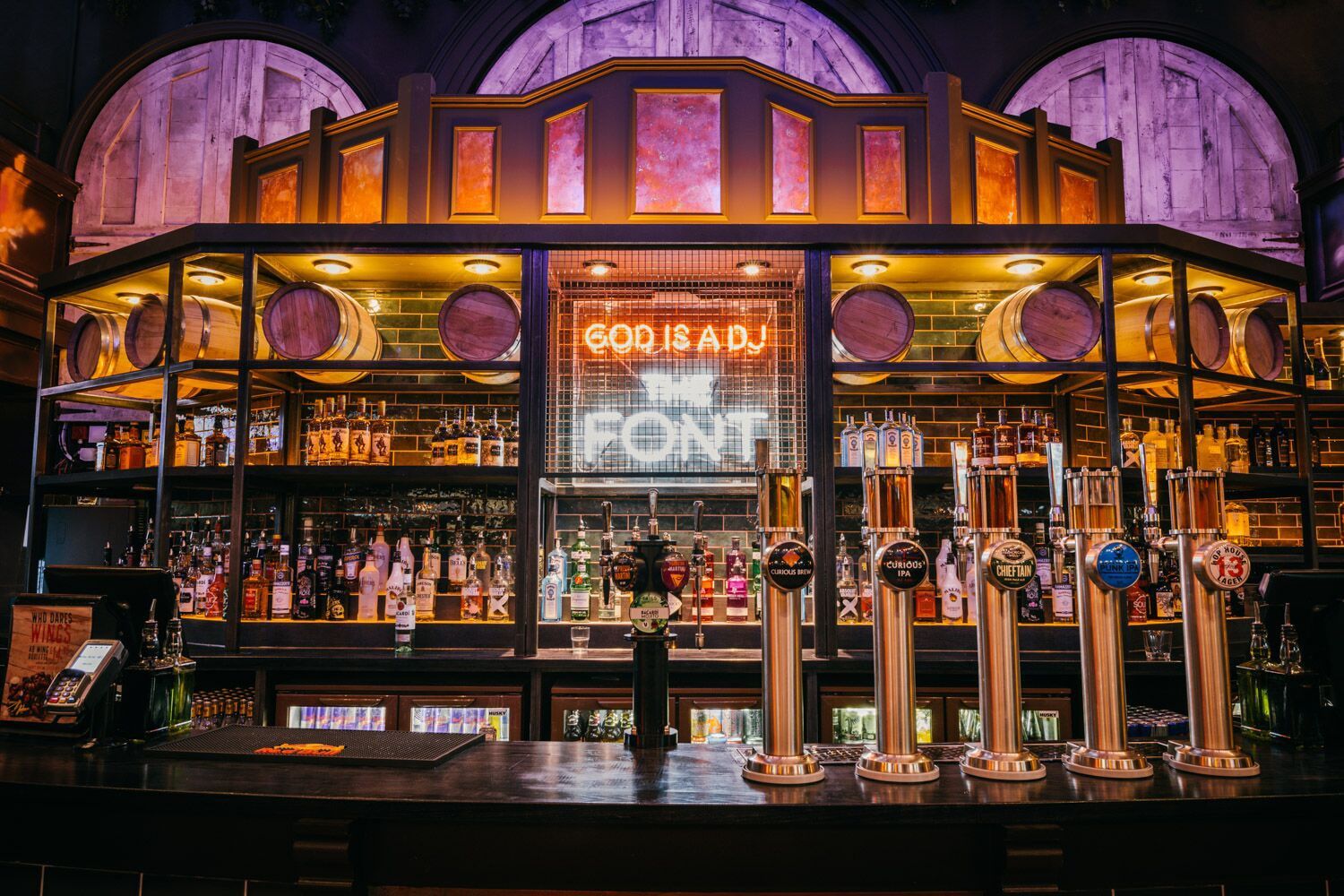 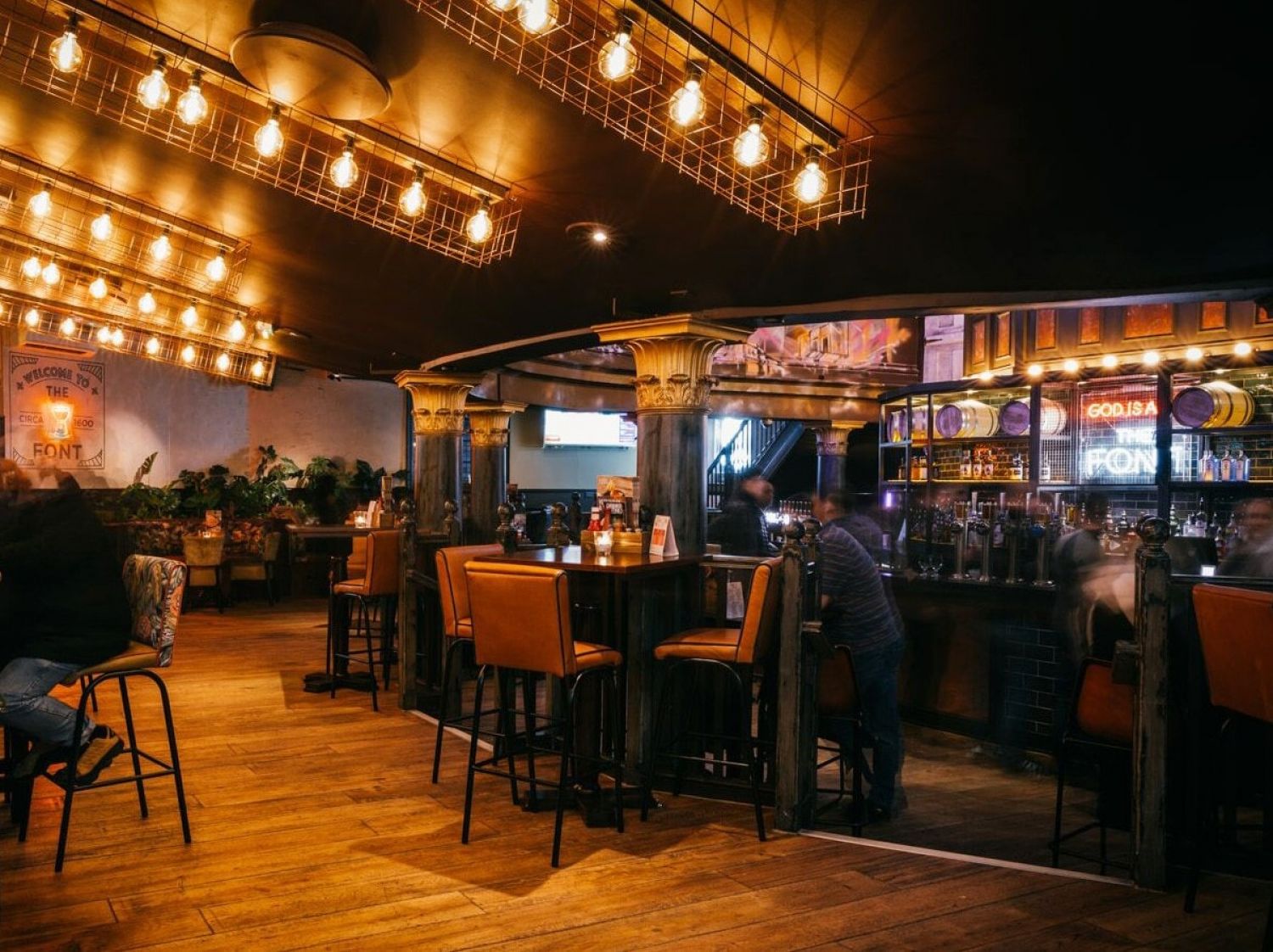 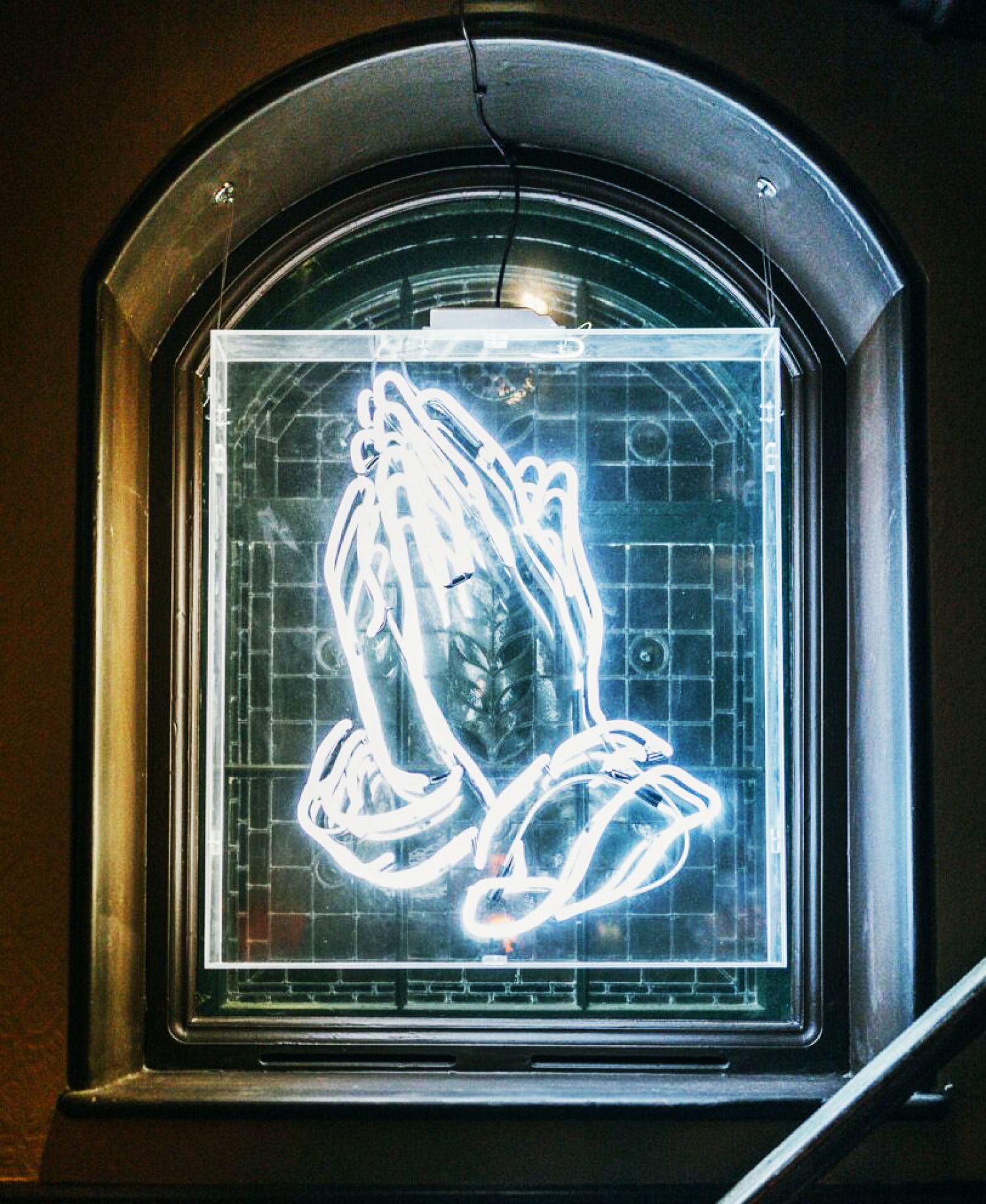 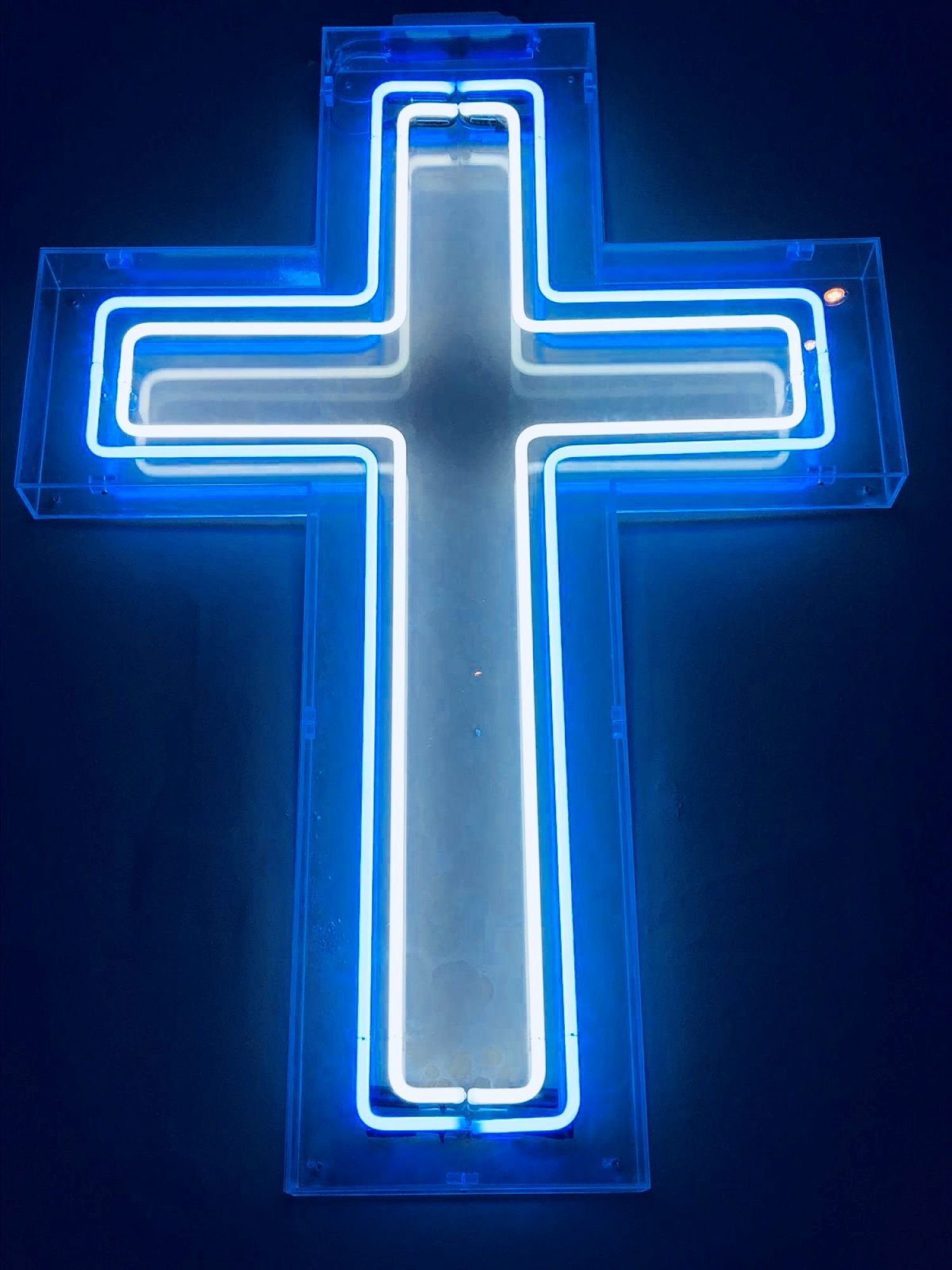 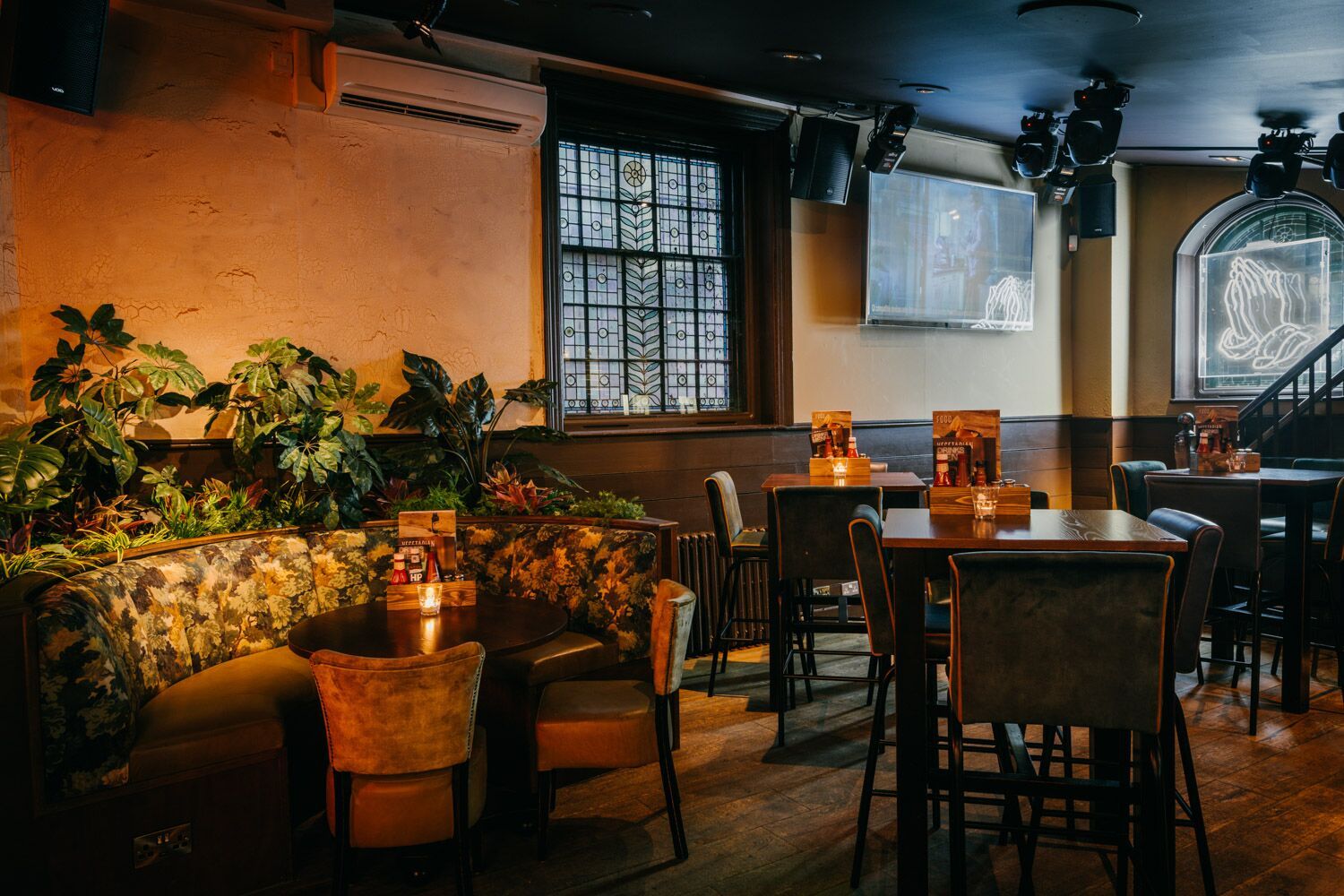 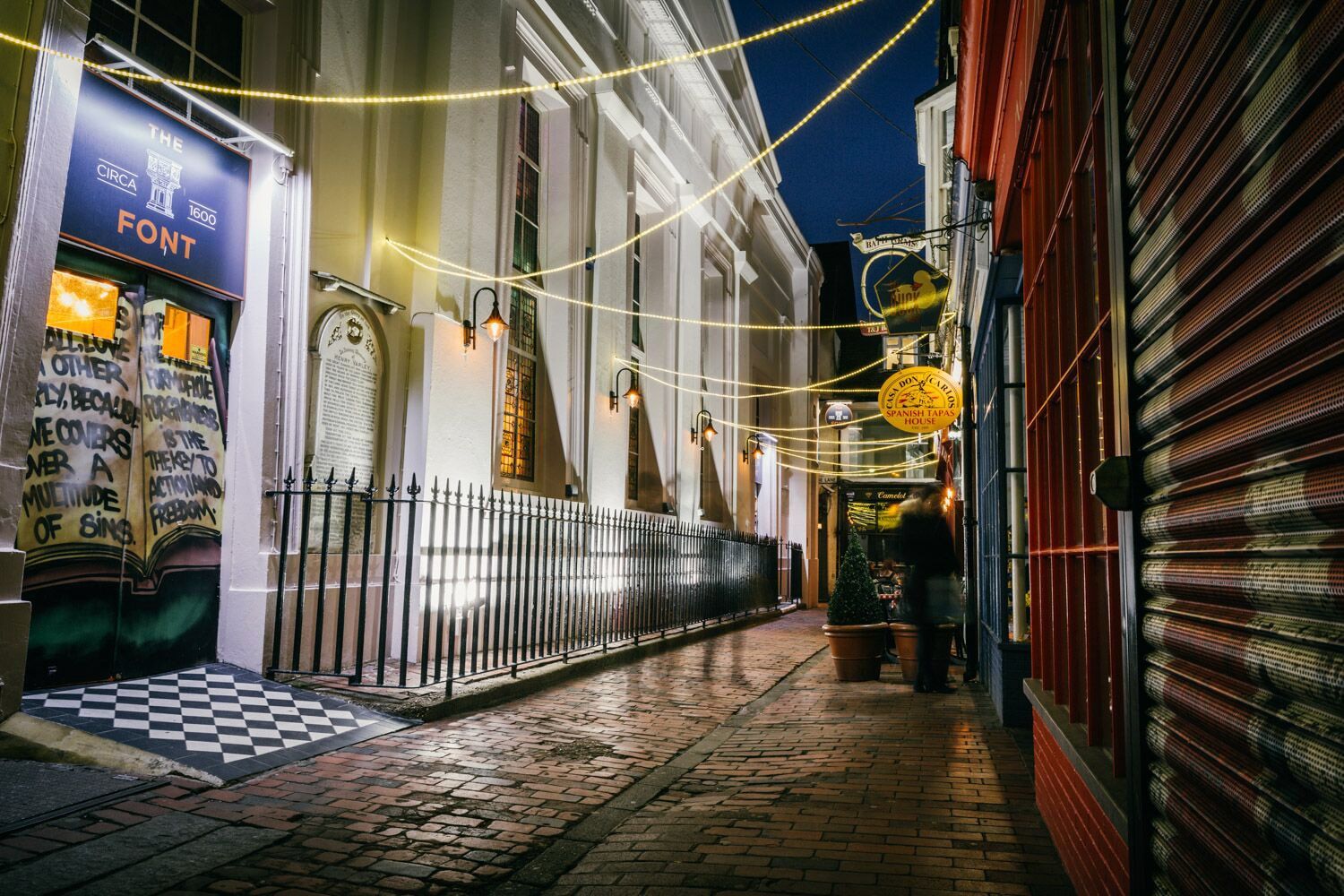